I may or may not have already expressed the particular grievance or frustration that I have with T-shirts with sayings on them and if I have, allow me to refresh your memory.

Last summer a trend resurfaced of t-shirts with phrases, quotes and words printed on them. I’m pretty sure this was a trend in the late 90s and early 2000s as I distinctly remember being a young teen and purchasing (asking my mum to buy) all my clothing from ‘Tammy Girl’. Does anyone else remember this shop? It was like the go-to shop for pre-teen girls! If you didn’t have ‘Juicy’ printed on your velour tracksuit bottoms then you were just so not ‘cool’. And just in case anyone was unclear of your status on the coolness scale, you could reassure them with a nifty t-shirt with ‘cool’ printed across the front of it (extra ‘cool’ points were given to those who had tops with added information e.g. ‘cool dude’ or ‘cool chick’).

Fast forward 10 years and imagine my disbelief when I noted t-shirts being sold last summer with the words ‘geek’ and ‘nerd’ printed across them. Some even had quotes on them. I don’t object to these as much as if it’s an inspirational quote or one that means a lot to you then I can understand someone’s choice in wearing it. However, I can foresee that in 10 years time (most likely sooner) we will have t-shirts with Miley Cyrus or Britney Spears quotes on them (god forbid) or even worse, t-shirts adorning Kanye’s famous ‘I am God’ lyrics. In fact, I am almost certain we will have t-shirts that say ‘twerk’ and ‘work b**ch’ on them, as well as perhaps ‘sexy h*e’ as an alternative to ‘cool chick’. How depressing is that?! I know it is inevitable though. It would simply be a reflection of the society we currently live in, which unfortunately, is not a particularly inspiring one for the most part, in my opinion.

The issue I take with t-shirts with phrases on them is that they are being used as a tool of communication. I do not want a t-shirt to tell me who a person is. I do not want a t-shirt to make a statement and give me an insight into your identity or character. I want t-shirts to function as t-shirts! I realise we’re moving towards an age where people seem to be finding it harder and harder to communicate verbally (mostly because they’d rather be physically glued to their phones tweeting/texting/browsing and chuckling to themselves thus allowing them to avoid actual human contact). However using a t-shirt to make a statement about who you are or who you think you are or who you want to be is about as credible as X-Factor is as a valid ‘talent’ competition.

The problem is that when I encounter such people who these t-shirts I feel the same sense of dismay that I do when I see Lady Gaga in yet another one of her ridiculous outfits, or when Kanye has uttered another ludicrous comment or Miley Cyrus has enacted a ridiculous stunt once again; it is a ploy for attention. The statement plastered across your t-shirt may as well say ‘look at me!’ or ‘notice me!’, I do not take them seriously, I do not feel you are a true embodiment of the shirt’s message because the thing is, actions speak louder than words on t-shirts. I don’t want to be told you’re a geek by your t-shirt, I want you to tell me you are, or better yet, show me. Tell me you too sometimes consider creating a World of Warcraft account, or you too have stayed up all night completing the Metal Gear Solid game or you too can think of nothing better than burying your head in a book for a day. Let me find out these things, don’t announce them to me through the medium of fashion. Take part in that old pastime that was once referred to as ‘talking to one another’, discover people’s personalities through conversation, divulge your views and opinions and even relay your favourite quotes to them. What I urge you all not to do is take the easy way out. Do not buy t-shirts with printed words or phrases on them as evidence of your ‘originality’ or ‘uniqueness’. You are not ‘different’ by doing so. The proof is in the fact that at least several hundred of those t-shirts were printed and made and sold and are now being worn by other ‘individuals’.

Allow your actions to define you, not your t-shirt. 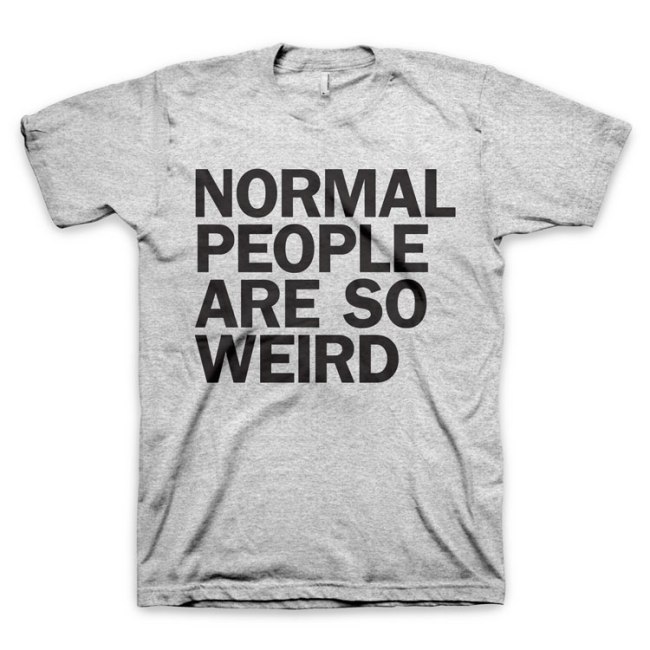